To share your memory on the wall of Zola Browning, sign in using one of the following options:

Provide comfort for the family of Zola Browning with a meaningful gesture of sympathy.

Consider providing a gift of comfort for the family of Zola Browning by sending flowers.

We encourage you to share your most beloved memories of Zola here, so that the family and other loved ones can always see it. You can upload cherished photographs, or share your favorite stories, and can even comment on those shared by others.

Posted Nov 01, 2019 at 11:26pm
What A Special Cousin Of Our Mom Betha Snider Pendergrass, We will miss hearing from Sweet Zola every Saturday. What A Blessing She has been to Her Dear Family and Friends. God Bless You All. Love from Jeanie Pendergrass Replogle & Don.
Comment Share
Share via: 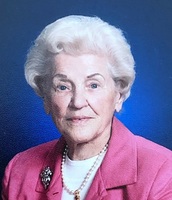