To share your memory on the wall of Roy and Barbara Nelson, sign in using one of the following options:

Provide comfort for the family of Roy and Barbara Nelson with a meaningful gesture of sympathy.

Barbara was born on February 23, 1935, to Lloyd and Chrystine Bedell in Kansas City, Missouri. Her childhood is best described as both humble and wonderful. Roy was born on April 2, 1934, to Roy William and Walla Nelson in Plattsburg, Missouri. His father passed when Roy was three years old. Roy was sent to live with his aunt and uncle, Eugene and Alice Robertson, at their small farm in Lamar, Missouri. In 1952, Roy enlisted in the United States Navy, where he served from 1952 to 1956.

While home on leave in 1955, Roy and Barbara were set up on a blind date. The rest of their love story became history. After returning home in 1956, Roy proposed to Barbara in October. They were married in June of 1957. In short succession, Roy and Barbara had three children: Darryl, Sheryl & Roger.

Barbara’s love for serving others was evident throughout her career in the Lee’s Summit public school system, teaching for thirty-two years, most of which was at Greenwood Elementary. Roy was a participating member of the Ararat Shrine for decades. He worked a series of jobs in facilities management at the Interstate Bakery, GM Leeds, Baptist Hospital, Unity Village and the Jackson County Courthouse.

Post retirement was the part of their story that they were most proud of. They spent all of their time serving others and celebrating in the accomplishments of their children and grandchildren. They loved attending any and all events that they participated in. Both were also very involved in their church community, as founding charter members of Aldersgate United Methodist Church.

Roy was an active member of the Lee’s Summit American Legion Post 189 and served as a member of the Honor Guard beginning in 2001. Aside from family, his allegiance to the post was something that defined his service and commitment to others. He was later recognized for serving in over two-thousand military funerals, was commander of his post and awarded the honor of Major in 2016.

Barbara was continuously involved in her community as her passion was to serve. She was a member of the VFW Ladies Auxiliary, the Lee’s Summit Hospital Auxiliary and American Legion Ladies Auxiliary, where she served as president from 2010-2012. One of Barbara’s favorite pastimes was sending cards for any and every occasion to family and friends.

Their health began to decline in 2014. All along, they both shared with family and friends that their wish was to be in the comfort of their own home, and more importantly, hand in hand as they leave this earth together. Our family worked together to honor their wishes. As health problems continued, in early August Barbara needed more intensive care and she was unable to be at home for the next seven weeks. Throughout her time away from home, Roy continued to remind our family daily that we were to be bringing her back home to him. Our family brought her back home in late September.

In early October, hospice was asked to provide support for Barbara. She was continuously surrounded by loved ones. Roy continued to encourage her daily to keep fighting and reminded family, “If she goes, I’m going.” A few weeks later, Roy’s health began to worsen. Hospice and Home Health focused on providing comfort care for them both. Both Roy and Barbara were able to stay peacefully together in the living room of their own home. On October 30, Barbara became unresponsive. Our family gathered around her, and she managed to stabilize. Later that evening, Roy’s oxygen unexpectedly dropped, but he was also able to stabilize.

On the evening of November 1st, the family was called to Barbara’s side. Our family embraced the last moments with her. Roy was able to stay by her side and she took her last breaths holding his hand. Our family continued to provide love and care for Roy as he then became unresponsive. The next morning, our family stayed close, providing encouragement for Roy. Each of his family was able to share words of peace and affirmation that he could go to be with her. Grandchildren embraced him and assured him that “grandma is waiting, it’s time to be with her, we will be ok,” he took his final breath moments later. He passed peacefully, surrounded by his children and grandchildren.

This is a true testament to the power of will, faith and true love. Their lifetime of dedication and self-sacrifice served as a monument to the exemplary people they both were as individuals and together. Their humility, integrity, and hard work continue to inspire those who knew them. For their story is the ultimate love story and is only the beginning of their happily ever after.

Contributions may be made in their honor to the Lee's Summit Educational Foundation, Veteran's Community Project, or a charity of your choice.
Read Less

Consider providing a gift of comfort for the family of Roy and Barbara Nelson by sending flowers.

We encourage you to share your most beloved memories of Roy and Barbara here, so that the family and other loved ones can always see it. You can upload cherished photographs, or share your favorite stories, and can even comment on those shared by others.

Posted Nov 09, 2019 at 01:34pm
I didn’t know your family, but I ran across their obituary. I am moved by your family’s loving care of Roy and Barbara. My condolences to all of you.
Comment Share
Share via:
BC

Posted Nov 07, 2019 at 02:51pm
Thank you Nelson family for sharing both Barbara and Roy with all of us. My thoughts and prayers are with you all during this difficult time.
Comment Share
Share via:
MT

Posted Nov 07, 2019 at 09:03am
Utterly marvelous that to such devoted individuals should go to their heavenly home hand-in-hand! Roy and Barb are two of the finest servants of God and loving examples for all of us to follow. Thank you, family, for the great obituary. It reminds us all how we could be better and Roy and Barb’s memory.
Comment Share
Share via:
HN

Posted Nov 05, 2019 at 03:27pm
Always kind and thoughtful to me in many ways through the years. I give thanks for them and know you in their family will help each other as a tribute to their love.
Comment Share
Share via:
CM

Posted Nov 04, 2019 at 05:23pm
My favorite memories are of all the support we had from both Roy and Barb as we spent hours in the ministry of Kid’s World at Aldersgate. They were there for everything we did with 100% support. Also, over the years of friendship they were always asking how my family was doing even when their health started declining. I grew to love and respect them dearly over the many years I knew them. I know they are in their happy ever after with The King Eternal but they will be missed!
Comment Share
Share via: 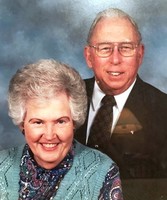