To share your memory on the wall of Robert Hawes, sign in using one of the following options:

Provide comfort for the family of Robert Hawes with a meaningful gesture of sympathy.

Consider providing a gift of comfort for the family of Robert Hawes by sending flowers.

We encourage you to share your most beloved memories of Robert here, so that the family and other loved ones can always see it. You can upload cherished photographs, or share your favorite stories, and can even comment on those shared by others.

Posted Sep 24, 2019 at 08:22pm
Uncle Bobby bought me a bride doll when I was little that was taller than me. He was the most caring and loving person. He would help everyone who needed it. I Love you Uncle Bobby. Love susie
Comment Share
Share via:

Posted Sep 24, 2019 at 08:10pm
My dad was a awesome man and MY HERO. He raised all 4 of us, his daughter's, by himself, so that by itself is an awesome memory.
I am so blessed and thankful he was my dad.
He will be missed, but "Earth" is only our temporary home anyways.
Until I see you again dad, my hero,
I love you forever and always,
Camie 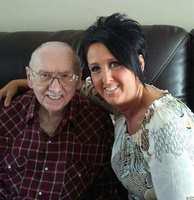