To share your memory on the wall of Randy Beale, sign in using one of the following options:

Print
Randy Edward Beale passed away at home, surrounded by family, on Tuesday, December 2, 2020. He was 66.

Randy was born on December 15, 1953 in Independence, Missouri to Alfred and Ethelyne Beale. He graduated from William Chrisman High S... Read More
Randy Edward Beale passed away at home, surrounded by family, on Tuesday, December 2, 2020. He was 66.

Randy was born on December 15, 1953 in Independence, Missouri to Alfred and Ethelyne Beale. He graduated from William Chrisman High School in 1972. Immediately after graduation he began working for Hallmark Cards where he worked for 38 years before retiring in 2010. He was a member of Fairmount United Methodist Church, where he met Monica Richardson when they were just kids. Randy then married the one and only love of his life, Monica, on June 23, 1973. Together they had 3 daughters-Kelly, Kristal and Kandi.

Randy loved spending time on the water. He taught his daughter at a very young age how to swim and instilled a love of the water in all of them. Randy loved to travel—from road trips to the coasts, to flying to Alaska, or, in more recent years, pulling a travel trailer to visit state and national parks with extended family and friends—it didn’t matter where he went, as long as he was with the people he loved. He was an avid Chief’s fan and loved his Royals and was so excited to see another World Series win in 2015 and then follow it with a Super Bowl win for the 2019 season. Football watching with his whole family, with football snacks was a favorite thing.

Randy loved his children immensely. He was their coach in sports and in life. Teaching them that there was no such thing as “I can’t”, which is how he lived his life, but especially obvious in how he fought his cancer over the past 2 years. Randy’s favorite role was being Poppy to his grandkids. The bond he had with each one of them is something they will carry with them forever. He was their biggest (and sometimes loudest) fan, always there to support them at games, award presentations, concert, and everything in between. He loved his family more than anything and loved to brag on them to anyone who would listen!

Randy never knew a stranger and had many friends that loved him dearly. When he loved, he loved big, with his whole heart. He would want you all-family and friends-to live life with no regrets, forgive and don’t hold a grudge, take advantage of the time you have, and love with your whole heart.

Visitation will be held Sunday, December 6th from 4-7pm at Carson-Speaks Chapel. 1501 W. Lexington Ave, Independence, MO. 64055. Visitation will be casual and you are highly encouraged to come in your Chief’s gear.

Please consider making a contribution in honor of Randy to ecaware.org.

Receive notifications about information and event scheduling for Randy

Consider providing a gift of comfort for the family of Randy Beale by sending flowers.

We encourage you to share your most beloved memories of Randy here, so that the family and other loved ones can always see it. You can upload cherished photographs, or share your favorite stories, and can even comment on those shared by others.

Posted Dec 05, 2020 at 09:39am
Monica,
Jerry and I were so sorry to hear of Randy's passing. You and your family are in our prayers.
Jerry and Sharon Wallen
Comment Share
Share via:
D

Posted Dec 04, 2020 at 08:31pm
The memories are just rolling through my head and they are all wonderful. Singing karaoke at Chi Chi’s, belly flops in the pool, working Santicaligon together, the chicken dance, game nights, dancing to crazy songs at Class Reunion followed by taking me to hear an interesting singer at the boats who I will not name, laying on the Mindrup’s couch witH Ashley asking what’s going on, .....the list goes on and on and on. I love this man and I thank his family for sharing him with me.
Love, Debbie
Comment Share
Share via:
TM

Posted Dec 04, 2020 at 08:17pm
I remember Randy with always having a smile on his face and so upbeat. Hugs to Monica and the family.
Comment Share
Share via:
PR

Posted Dec 04, 2020 at 12:37pm
My best buddy. The absolute best brother in law my family could ask for. All the memories I will always cherish. Love you brother
Comment Share
Share via:
J

What a loss for all of us but such a gain for heaven. The Beale family was always the best. I have great memories from church and the East Independence group the Spring Branch group. Much love to the family 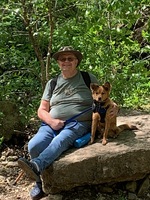