To share your memory on the wall of Judith James, sign in using one of the following options:

Judy is survived by her four daughters, Cathy Bledsoe (Rodney) of Peculiar, MO; Dawn Brooks (Earl) of Panama City Beach, FL; Peggy Lewis (Jim) of Meriden, KS; and Alisha James of Topeka, KS; 11 grandchildren and 27 great-grandchildren; as well as, her sister, Nancy Bourgon (Henry) of ME; and her brother-in-law, Jerry James (Rose Marie) of OK.

Judy was a woman of strong Christian faith who enjoyed giving of her time and resources. She loved to knit and sew for her grandchildren and great-grandchildren and received several acclamations for her volunteer work tutoring kindergartners in reading.

Judy had a green thumb and enjoyed gardening. She grew a large variety of beautiful African violets which she loved to display around her home. Her most treasured times were those spent with her grandchildren playing games and swimming, and later sitting and listening to the escapades and achievements of her grandchildren and great-grandchildren.

Judy will be laid to rest next to her husband in New Home Cemetery, Nash, Oklahoma.
Online condolences may be expressed at www.speakschapel.com (Arrangements: Speaks Suburban Chapel 816-373-3600)
Read Less

Receive notifications about information and event scheduling for Judith

Consider providing a gift of comfort for the family of Judith James by sending flowers.

We encourage you to share your most beloved memories of Judith here, so that the family and other loved ones can always see it. You can upload cherished photographs, or share your favorite stories, and can even comment on those shared by others.

Posted Aug 19, 2019 at 01:33pm
Laughing with Jesus!!! Judy loved the Lord and her family so much and laughed so easily when she was well. It was always a joy when we had the opportunity to be with her and her family. "Uncle Jerry and Aunt Rose-Marie."
Comment Share
Share via: 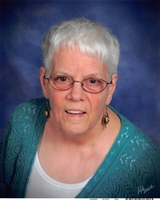