To share your memory on the wall of John O'Benar, sign in using one of the following options:

Provide comfort for the family of John O'Benar with a meaningful gesture of sympathy.

Consider providing a gift of comfort for the family of John O'Benar by sending flowers.

Posted Oct 02, 2019 at 03:25pm
My seventh grade English teacher. Truly dedicated to his profession. He made a difference in our lives.
Comment Share
Share via:
VM

Posted Oct 02, 2019 at 01:04pm
I never got to meet Mr. O'Benar but I do know that he raised a wonderful daughter and teacher in Jacquie Snow.

Eternal rest, grant unto him O Lord
and let perpetual light shine upon him.

May he rest in peace. Amen.

Posted Oct 01, 2019 at 01:56pm
I remember a Mr. O'Benar as a teacher at Immanuel Luther School in Kansas City, Missouri in the late 1950's; would this be him? If so, he was a wonderfully kind man and a great teacher.
Comment Share
Share via:
RD

Dad taught at Immanuel early in his career, and we forgot to mention that in his obituary You're thinking of the right man. Thank you for your kind words. 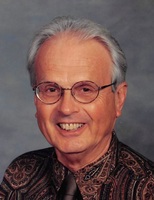