To share your memory on the wall of Joan Sharkey, sign in using one of the following options:

Provide comfort for the family of Joan Sharkey with a meaningful gesture of sympathy.

Consider providing a gift of comfort for the family of Joan Sharkey by sending flowers.

We encourage you to share your most beloved memories of Joan here, so that the family and other loved ones can always see it. You can upload cherished photographs, or share your favorite stories, and can even comment on those shared by others.

Posted Oct 12, 2019 at 04:32am
I meet Joan somewhere back in the 1970's. Then later on in 1985 at the Lake. then one day had dinner at her house with the family. Took nearly 30 plus years to understand her kindness towards me. Well long story short, her family the Stacker, lived in North Dakota, my mother Wanda King was a family friend. It was always nice to see Joan and Harold through the yrs, Had dinner with them at the North Dakota, Montana get together this summer. Joan always had a hug for me. 70 plus years of inter action Condolence to the family. Jerry norby
Comment Share
Share via:
MM

Posted Oct 11, 2019 at 03:21pm
I became friends with Joan through a mutual friend, Marilyn Potts. I loved seeing her when Marilyn and I would go to Missouri. When Marilyn passed away in August 2017 Joan gave me a book called “Tear Soup” which is a great book on grief. Joan and I have talked and talked since then (her in Missouri and me in Texas) and we would usually end up laughing about something. We’ve shared many memories of our friend, Marilyn, and I believe we helped each other in our grieving. My life has been blessed by knowing her and I will miss her terribly!
Comment Share
Share via:
DS

Posted Oct 10, 2019 at 06:17pm
Growing up, I always loved our family dinner get togethers because I thought it was so cool that your mom made homemade pizza! She was a wonderful woman and will be missed by many. Peace be with you all and my prayers are with you as well.
Comment Share
Share via: 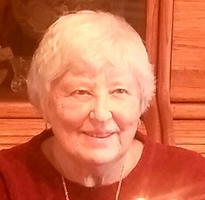