To share your memory on the wall of Jean Hancock, sign in using one of the following options:

Receive notifications about information and event scheduling for Jean

Consider providing a gift of comfort for the family of Jean Hancock by sending flowers.

We encourage you to share your most beloved memories of Jean here, so that the family and other loved ones can always see it. You can upload cherished photographs, or share your favorite stories, and can even comment on those shared by others.

Posted Aug 25, 2019 at 07:36pm
Al and Jean were a part of our family life since the 1950's and never failed to enliven any event. Jean's spunk and enthusiasm, her honesty and outspokenness made her a wonderful friend and example of what it looked like to live life to the fullest. Orv and I loved sharing rides in Al's many sports cars, hearing of their travels by motorcycle, and searching out new restaurants. It was hard to imagine Jean hefting her kayak onto her car and paddling away and her tales made me laugh. I treasured her as a loyal friend and appreciated her support over the years. She was definitely a strong woman, and she and Al were a strong duo. They both made a lasting contribution to their community, friends, and family. The Plucker family sends condolences to Kathy, Bill, Mary, and their families.
Mavis Plucker

Posted Aug 23, 2019 at 01:42pm
We have precious memories of Al and Jean, when were our Aspen Street neighbors, and they always make us smile! Together, they enjoyed the lake more than anyone we have ever known, with their sail boats, kayaks, & inner tubes specially equipped to allow their doggie friends float with them. There wasn't anyone who enjoyed life more than they did! Their stories of their life and the history of life together were amazing, entertaining and heart warming! We are grateful for having known Jean and Al!
Sue, John and Megan Evans
Comment Share
Share via:
HJ

Posted Aug 23, 2019 at 11:42am
Jean and Al with among my parents' best friends. They were inseparable and one of my memories of Jean and Al on their motorcycles, seeing the world close up as companions for life. Reading Jean's early years, it reminds me that this generation of women had so much talent and were the key "drivers" of their families. It is because of women like Jean that later generations of women could reach their potential and I'm sure Jean will always be smiling at the many accomplishments of her children, grandchildren and great-grandchildren. On behalf of the Jonas family, we wish our deepest condolences to Kathy, Bill and Mary and their families. And we are most grateful for the ongoing friendship of the Hancock family.
Comment Share
Share via:
PC

Posted Aug 22, 2019 at 09:24am
We will miss Jean. We got to know her when she lived in Primrose. We visited her in LeeSummit a few times as we missed her when she moved. She and Jackie walked a couple times a day and always stopped to visit when we were outside. She was an amazing woman whom we grew to love. She shared her kayaking stories with us and shared pictures. Jean embroidered Barney and Happy on tea towels which we cherish. Rest In Peace dear Jean. We will miss you!
Pat and Harold Cunningham
Comment Share
Share via: 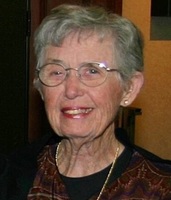