To share your memory on the wall of Jay Ricketts, sign in using one of the following options:

Receive notifications about information and event scheduling for Jay

Consider providing a gift of comfort for the family of Jay Ricketts by sending flowers.

We encourage you to share your most beloved memories of Jay here, so that the family and other loved ones can always see it. You can upload cherished photographs, or share your favorite stories, and can even comment on those shared by others.

Posted Aug 16, 2019 at 02:00pm
Jay was a friend and a mentor of sorts ,we served on the Fire Dept. and the executive board of Local 42 together, and attended conferences together. I will miss him .
Comment Share
Share via:
M

Posted Aug 14, 2019 at 10:49am
Chief Jay was on the interview panel when I was trying to get on the fire department. When I walked into the room for my interview the first thing out of his mouth was “Dang son you look just like your father Turkey Neck Tom”. Everyone got a good laugh, except me. Great memory for me of a great man.
Comment Share
Share via:
DS

Thank you for sharing your memory. We all got a much needed LOL!! 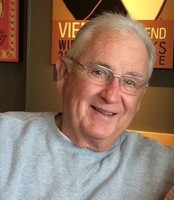