To share your memory on the wall of James Copenhaver, sign in using one of the following options:

Provide comfort for the family of James Copenhaver with a meaningful gesture of sympathy.

Consider providing a gift of comfort for the family of James Copenhaver by sending flowers.

Posted Oct 30, 2019 at 01:58pm
I worked with Mike at TBC Corporation in the Learning & Development department. He was so gracious and helpful to me when I first started at the company and enjoyed our exchanges through email and when he came to the corporate offices. I will miss him greatly.
Comment Share
Share via:
AC

Posted Oct 23, 2019 at 05:00pm
I worked with Mike at TBC Corporation in the Safety Department the last few months since I started. Mike was a wonderful coworker, and he always went out of his way to ensure you understood what he was saying. He was a genius with numbers, and you can tell he was always excited to hear to you when you called. He will be missed.
Comment Share
Share via:
TB

Dearest Donna, David, Aimee, Juanita, and all the Copenhaver family, The Busby's and Yarnell's send their Love and Deepest Condolence's to all of you. Mike will forever remain close in our hearts and fond memories. Our thoughts and prayers remain with you always, and we so share in your grief. God Bless, Love, Carla Yarnell
AK

Posted Oct 21, 2019 at 04:54pm
I love you, Dad. I’ve been playing Chicago for the past few days now. Every time I play “25 or 6 to 4,” I can feel you with me. Words will never be able to describe how very much I love and miss you. I’ll miss your jokes, goofy sense of humor, voice, and I’ll always remember how you used to call me A Train. You are the reason I work so hard today.
Comment Share
Share via:
EM

Posted Oct 21, 2019 at 12:50pm
Uncle Mike was absolutely the best bear hugger and storyteller. We will miss the way his warmth and laughter filled the room at holiday gatherings. I will tell all of your stories to my children, maybe not as well as you did, but in that way you will live on. All my love Donna, David, and Aimee.
Comment Share
Share via: 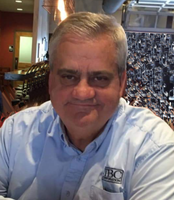