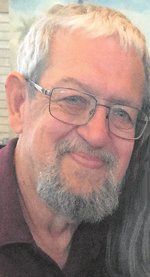 In lieu of flowers, contributions can be made to Cancer Action and MOKAN Boxer Rescue.

All rights reserved. This obituary is also archived at obittree.com