To share your memory on the wall of Gary Barr, sign in using one of the following options:

Provide comfort for the family of Gary Barr with a meaningful gesture of sympathy.

After the Navy, Gary returned to Independence where he and Nancy made their home and lived their married life on Main Street. Gary was a machinist and tool and die maker by trade. He was a union man and worked many years as a member of the CWA for Western Electric and then AT&T, eventually retiring after 32 years from Avaya. Gary was a skilled craftsman, a master repairman, and enjoyed woodworking. He and Nancy spent the past 30 years working to restore the Historic Bryant Home on South Main Street to is original grandeur. He particularly loved collecting and restoring antiques and took great pride in his antique car collection. He was a member of the Heart of America Model A Ford Club, Plain Old A’s, and Ararat Shrine Antique Auto Club. He was an active member of First Baptist Church in Independence. He was Master Mason, Past Master of McDonald Lodge #324, and a member of the Ararat Shrine and Scottish Rite. Gary had a great respect for his membership with Boy Scouts of America. He was a member of the Tribe of Mic-O-Say, an Eagle Scout, a Scoutmaster, and later enjoyed scouting with his grandson and helping him to achieve his Eagle Scout ranking. Gary fancied himself as a biker at heart and was a proud H.O.G. (member of the Harley Owners Group). He was a proud Veteran and lifetime member of the VFW Post #1000.

Those who loved Gary will remember him for being one of the hardest working, hardest loving men they’ve ever known. He loved his wife Nancy most of all, but his family and friends always knew they ran a close second. He was greatly humbled by how God had blessed his life and expressed his gratitude daily. He knew that God had blessed him with many mentors throughout his life so he worked hard to mentor others.

Gary was preceded in death by his parents Warren and Ruth, Brother John (Jack) Barr, and Uncle Jake and Aunt Louise. He is survived by his wife Nancy, daughters Jennifer Rentfro (Aaron) and Christina Leakey (Brian), both of Independence; and grandchildren Madalyn Leakey, Jessup Leakey and Kennedy Rentfro.

Receive notifications about information and event scheduling for Gary

Consider providing a gift of comfort for the family of Gary Barr by sending flowers.

We encourage you to share your most beloved memories of Gary here, so that the family and other loved ones can always see it. You can upload cherished photographs, or share your favorite stories, and can even comment on those shared by others.

Posted Aug 09, 2019 at 08:06am
I am so very very sorry for your loss. I remember many afternoons at the Barr house throughout my school years—some of my favorite. What a loving family man who will be so greatly missed. I will be thinking and praying for you all. All of my love-Kathy (Billings) Massing
Comment Share
Share via:
VH

Posted Aug 08, 2019 at 09:44pm
Nancy, I am so sorry for your loss. You knew from when you met Gary that he was your true love, and you were so right. May your memories give you comfort. You and your family are in my thoughts.
Comment Share
Share via:

Posted Aug 08, 2019 at 05:54pm
Nancy, Jennifer and Christina, so sad to hear about your Dad and husband. It wasn't that long ago Mom and I
got to see Nancy and Gary walking out of Sam's club. The times we were able to hang out with all of you at Hermann
are times we all truly cherish. Gary was always a kind, and funny guy. Our deepest sympathy for you all.
Many hugs and tears for you all,
Jeane Barnett, Julie Barnett, Danny and Ki Ki DesCombes
Comment Share
Share via:

Posted Aug 08, 2019 at 09:04am
My sympathy to Gary's family. I remember when he was born and I remember both of his parents. They were such nice people and his Mother was beautiful. My father and Gary's were childhood friends. His father was a sweet, kind person so I am not surprised that Gary turned out to be a great husband, father and friend to all. Mary Lou Fields Shelton
Comment Share
Share via:
LR

Posted Aug 07, 2019 at 07:59pm
Nancy and family, so sorry for your tragic loss. Prayers to your family for strength and the holy spirits comforting hand as you face this loss.
Linda (Horn) Rinehart
Comment Share
Share via: 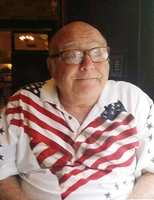