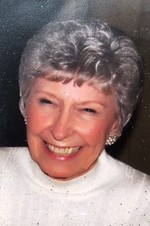 Donna Marie Ochs passed away in her sleep on the night of Tuesday, Sept. 17, 2019 at the age of 91. She was living at The Villages of Jackson Creek in Independence, Missouri.

Donna was born March 11, 1928 in Independence, Missouri the fourth daughter of Charles Compton Crabb and Olive LaVona (Tomlinson) Crabb. Her three sisters LaVona Coleman, Evelyn Schmitt, and Mildred McClain preceded her in death. After her father Charles’ early death her mother Olive moved to Independence with her young daughters and asked her mother Jane Buchanan Tomlinson to live with them. Jane helped run the house and take care of the four little girls while Olive worked, and Donna grew up particularly close to her ever-present grandmother. Donna was baptized when 8 years old at the Walnut Park RLDS Congregation in Independence, Missouri. While growing up she enjoyed sports, singing in church with her sister Mildred, and learning from her grandmother to live a life of service to others.

Donna graduated from William Chrisman High School in 1945. After high school she enrolled in nurses training at the Independence Sanitarium and Hospital. Donna married Fred C. Smith on June 20, 1946 in Independence, Missouri at the Walnut Park church. They had three children Charles Rayburn, Stephen Lynn, and Nancy Jayne.

On January 26, 1973 Donna married Jack R. Ochs of Independence and expanded her family to include Jack’s three children Robert, Debbie, and Dana. Donna was very involved in her children’s and grandchildren’s lives through school, the PTA, boy-scouts, sports and school activities, and family vacations to the lake. She loved being a grandmother with overnights, picnics at Lake Jacomo, playing dress up and losing every card game of Old Maid.

For many years Donna kept the books for Jack’s construction business and was the property manager for their rental properties. She also became his full-time caregiver in their home as Jack’s Parkinson’s Disease advanced over a 15-year span. Donna and Jack were married for 46 years until Jack’s passing in July 2019.

Donna is survived by her children Charles Smith and wife Tesa from Glenwood, Missouri, Steve Smith and wife Debbie from Kansas City, Missouri, Nancy (Smith) Kerr from Independence, Missouri; her step-children Robert Ochs and wife Carol of Humble, Texas, Debbie Rosenquist and husband John of Clearwater, Florida, and Dana Storm and husband Gary from Independence, Missouri. She is also survived by eleven grandchildren and 19 great-grandchildren.

All rights reserved. This obituary is also archived at obittree.com